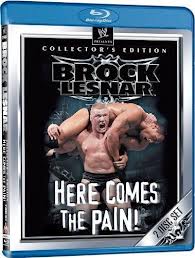 
Before I begin , I should mention that I have never watched the original Here Comes The Pain documentary , so I wouldn't be able to tell you if anything has been removed or added .


I did really enjoy this feature . It starts by talking about where he grew up and then moves on to his amateur career . The rest of the doc. shows us his major feuds and matches in the WWE . It is not in kayfabe by the way . For some reason the doc. stops randomly at the stretcher match with Big Show at Judgment Day . Couldn't WWE have added the rest of his WWE tenure and then talked about his return ? That is my only real complaint , although it is a big one . I'll give it  7.5/10

Brock gives a short interview before each match .


Brock Lesnar vs Leviathan
The first of two OVW matches on the set . It's pretty cool to see Lesnar and Batista going at it . Might be the only time they have . This wasn't a bad match at all . Leviathan wins it with a spear . *3/4

Rico Constantino & Prototype vs The Minnesota Stretching Crew
Final OVW match on the set . Prototype is , of course , John Cena . Nice to see early action between the two , considering the classic they would go on to have . While this was an OVW match , it took place on Raw . Enjoyable tag match . Shelton pins Rico to win the titles . **

Brock Lesnar vs Jeff Hardy
From Backlash 2002 . Lesnar's first PPV match and first official WWE match . This was basically Brock beating the crap out of Jeff but it was fun to watch . Brock was even allowed to kick out of the swanton . The match ends as Jeff can't continue . **

Brock Lesnar vs Rob Van Dam
This was the final of the 2002 King of the Ring . You could say that this was Lesnar's big moment in WWE as it led to his match at that years Summerslam . Ok match as Lesnar hits the F5 to win the match and crowned the king . *3/4

Rob Van Dam & Ric Flair vs Brock Lesnar & Undertaker
Nice to see a rare tag match on here . Match was entertaining . Would have been better if RVD had spent more time in the ring . Taker hits RVD with the last ride to get the win . **1/4

Brock Lesnar vs Hulk Hogan
The winner here would face the Rock at Summerslam for the WWE Title . This match really helped Lesnar become a superstar . The way he bloodied Hogan and wiped the blood on his own body was unbelievable . Brock makes Hogan pass out to pick up the upset . ***

The Rock vs Brock Lesnar
Quite the historical matchup here . Even after only being in the WWE for a few months , it was Brock's time to be the man . This showed how big an impact he made in the WWE , and still has an impact even today . This match took place at one of the all time great PPVs at Summerslam 2002 . This match starts off so quickly with a belly-to-belly from Lesnar . This is gonna be awesome . Such a fast paced , exciting match . Lesnar locked in the sharpshooter . Fans are really behind Brock . Rock hit with a steel chair . Heyman rock bottomed through an announce table ! Lesnar kicks out of a rock bottom ! Rock kicks out of a rock bottom ! Lesnar wins with the F5 . Overall an excellent match . ****

Brock Lesnar vs Randy Orton
Strange to think how a decade later , this is considered a dream matchup . Really looking forward to watching this one . This one was mostly to show Brock's dominance , but Orton looked impressive in there . Brock hits the F5 to win . **

Brock Lesnar vs Undertaker
From Unforgiven 2002 . This was to see if Brock really had what it took to be the man in the WWE . The way that Brock squared up to Taker was awesome . These guys showed some nice chemistry here , which would carry on to their HIAC match . Both guys beat the crap out of each other . A great match with a bad finish . It ends with a double DQ . ***1/2

They don't show Lesnar being thrown through the stage .


Brock Lesnar vs Undertaker : Hell in a Cell
Definitely one of the better HIAC matches in history . Taker's head was absolutely gushing blood . No wonder he took time off afterwards . Lesnar retains his title after countering a tombstone into an F5 . Awesome stuff . Lesnar showed that he could be the guy to lead the WWE .  ****1/4

They show the 2003 Royal Rumble from the point in which Lesnar entered which was 29 . I won't rate it since it's just a small part of the rumble . It was a big moment for Brock though .

Brock Lesnar vs Team Angle
Team Angle was Charlie Haas and Shelton Benjamin . Two great athletes that never really got their due . Especially Shelton . If Lesnar beats both guys , he gets to face Kurt in a cage match . For a handicap match , this was really good . Brock wins with an F5 . ***


Brock Lesnar vs Kurt Angle
Looking at this card , it is quite amazing that this match made the main event . Both guys were capable of pulling it off , but this was Lesnar's first Wrestlemania and Angle's first time in the main event at Wrestlemania so there had to be nerves here . Vince must have had a lot of faith in both guys to put them here . Aside from the botched ending , these guys managed to give us a fantastic match on a fantastic night , to give us probably the second-best Wrestlemania in history . I think we all know the no.1 anyway . Lesnar wins after a third F-5 to Angle . A new champion is crowned . ****1/4

John Cena vs Brock Lesnar
From Backlash 2003 and the WWE Title is on the line . Strange how the roles were reversed almost exactly 8 years later . Lesnar bled pretty badly in this one . Hearing grown men chant ' Lets go Cena ' sounds wrong . Lesnar retains with an F5 . **3/4

Brock Lesnar vs Kurt Angle : 60 Minute Iron Man Match
One of the best Smackdown matches in history and one of the best Iron Man matches . WWE Title was on the line . Angle goes 1-0 after Brock hit him with a chair and was DQ'd . Brock quickly ties it after an F5 . Brock makes it 2-1 with an ankle lock . Brock goes 3-1 with a count out . Angle makes it 3-2 with an Angle slam . Brock is 4-2 after hitting Angle with the title . Brock makes it 5-2 with a top rope perfectplex . Angle makes it 5-3 with a belly to belly from the top rope . Brock taps to the Angle lock to make it 5-4 . The match ends 5-4 to Brock as he becomes the new champion . ****1/4

Brock Lesnar vs Rey Mysterio
I've never seen these two fight each other , so I'm really looking forward to this one . Should be a good one . Nice little match here as Rey taps to Lesnar's submission move . ***

Brock Lesnar vs Big Show
Everyone remembers this infamous match for the WWE Championship . This was the match that finished with the ring imploding ( that was stolen 8 years later ) . Actually a pretty good match that ends in a draw . ***


Brock Lesnar vs Goldberg : Special Referee - Stone Cold Steve Austin
Ah this infamous match . I remember at the time thinking it was going to be great , and once it was over , even at 9 years old , I thought ' what the fuck was that ??' I had no idea both guys were quitting after the match . The match isn't good but is worth watching thanks to the great crowd reactions to both men . The match starts with a ' You sold out ' chant . They even start singing ' Na na na na Goodbye ' . Both guys just walking around the ring staring each other down . Austin gets his own nice chant and has a little grin on his face . Finally some contact . Even that's boring . Finally they get going with some power moves . Goldberg wins with a Jackhammer . I'll give the whole thing *1/4 . The fans made this match worth watching . Lesnar gives the fans and Austin two middle fingers and Austin returns the favour with a stunner . Austin also hits Goldberg with a stunner leaving the fans happy . Quite surreal to say the least .

Brock Lesnar vs Ric Flair
This is a match that showed that Lesnar was for real . This was actually a really fun match . Brock beats his first legend after hitting Flair with an F5 for the victory . ***

Brock Lesnar vs Triple H vs The Rock
This took place on the Australian Global Warning Tour . I would call it a dream match of sorts . That is one big ass arena . The match started off a little slow , but was great by the end . The Rock retains his title by pinning HHH after a rock bottom . ***1/2

Brock Lesnar / Kurt Angle / Mr America vs Big Show / Charlie Haas / Shelton Benjamin
We all knew Mr America was Hulk Hogan , although he would never admit that . Should be a good match . This was a basic six man tag , which ended in a big clusterfuck , but it was a lot of fun . Show pins Mr America to win the match . **3/4

Brock Lesnar vs Big Show vs Kurt Angle
From Vengeance 2003 . This was Angle's PPV return from having neck surgery after Wrestlemania XIX . Brock's powerbomb to Show was awesome . This was a highly enjoyable triple threat match . Angle wins the title after pinning Lesnar with the angle slam . ***1/2

John Cena vs Brock Lesnar : Extreme Rules Match
5 seconds into the match and John Cena is busted way open . Unbelievable. This match was tense and BRUTAL throughout and it feels like there is change coming toward the WWE . Absolute classic that will never be forgotten by anyone that watched it . I have new respect for John Cena . ****1/2

8/10 . Enjoyable documentary , the matches were nice and I enjoyed the small interview portions with Brock . I'm not sure I would recommend the DVD , but I'd damn sure recommend the blu ray .
Posted by rossd971 at 11:31