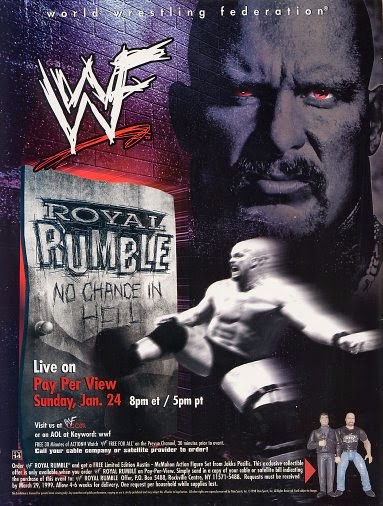 
After last Sunday's very controversial Rumble event, I thought I'd go back to this one as it was originally well known as having the worst Rumble match in history. A lot of people have now named the 2015 Rumble as the worst one ever, so I wanted to go back and see which one was indeed the worst, and I thought I might as well review the rest of the show too.


Jerry Lawler and Michael Cole are the announcers for the night. Weird to think that they're still there sixteen years later. Feels longer.

Road Dogg vs The Big Boss Man
Speaking of acts that for some reason still around today, here we have Road Dogg defending his Hardcore Championship. For some reason this isn't a hardcore rules match. What the hell is the point then? This was a mostly boring match with only Road Dogg's comeback being the most interesting part and that only lasted about thirty seconds, with Boss Man hitting him with the big side slam to win the Title. Bad opening match. *

Billy Gunn vs Ken Shamrock
The IC Title is on the line. I believe this is the first of many of Billy's failed singles pushes. Shamrock was pissed at Billy as he mooned his sister while she was in the crowd. I'm pretty sure mooning was all Billy was good at. This started off with an energetic pace but it slowed down considerably as it continued. Another boring match with Shamrock controlling almost the entire match and Billy didn't look that strong since he couldn't even beat Shamrock with Val Venis' help. Another forgettable bout. *1/4

Gangrel vs X-Pac
The European Title is on the line. Two minutes in and this one is already more entertaining than the last two matches. X-Pac was pretty good around this point and was always able to give us a good match. The only thing that really brought it down was a botched three count by referee Teddy Long. Better stick to making tag matches Teddy. This one was way too short though and I was really enjoying it whilst the last two matches were long and boring. A short but sweet match that could have been better with more time. Best of the night so far. **

Shane McMahon enters the ring so he can introduce Luna Vachon. He wants Sable to forfeit her Title to Luna and out comes Sable with a back injury. The match will go on.

Luna Vachon vs Sable : Strap Match
The Women's Title is on the line. Luna is looking very strange tonight. Just like every night. This is the kind of strap match you have to touch all four corners to win. I prefer when it's pinfall and submission rules. A short match that didn't really feature much except for the strap being used as a choking device. This ended like all other strap matches, with the face touching the corners after the heel, only to hit the last one and win. 1/2*

Mankind vs The Rock : I Quit
The WWF Title is on the line. This is one that is much harder to watch now that we know what chair shots do to people. If you think chair shots to the face should still be allowed in wrestling then just watch the Beyond the Mat documentary and you'll why it's a good thing that they're banned. The chair shots are just so hard to watch and I have no idea why Mick would bring his kids to watch this one. Although before all the chair shots began, this was a pretty fun match and still featured some big spots like Mankind's fall into the electrical equipment or a nasty fall on the announce table. Plus when Rock was on the mic it was never not entertaining. But then the chair shots arrive and things get uncomfortable. It's hard to rate this match like any other match, but I'd recommend it even just to see why safety measures are necessary in wresstling. I'll go with  ***1/2

One thing I can note at this point in the show is that laser pointers are a real pain in the ass.

The Royal Rumble Match
I only know of a couple of storylines going into this match like the $100,000 bounty on Austin's head or the fact that Chyna is #30 and will be the first woman in a Rumble match. Steve Austin and Vince McMahon are the first two entrants. I think Austin was the only likely winner of this one which did hurt things quite a bit even if he didn't end up winning which he probably should have. Austin kicking Vince's ass at the start was probably the funnest part of the match. Nothing much else happened in the match but it wasn't really boring as it had a sort chaotic feel to it. I actually enjoyed this more than I thought I would. McMahon as the winner was an awful decision but the entire match was pretty fun to be honest. It's still one of the worst but it's not bad. I'll give it  **1/2


4.5/10. Yeah this wasn't a very good show. The Rumble was pretty average overall, the WWF Title match was good but disturbing, and everything else was just completely forgettable. I did review this to compare this Rumble to the 2015 Rumble, so I'll say that the 2015 is the worst one ever. A bad show here. 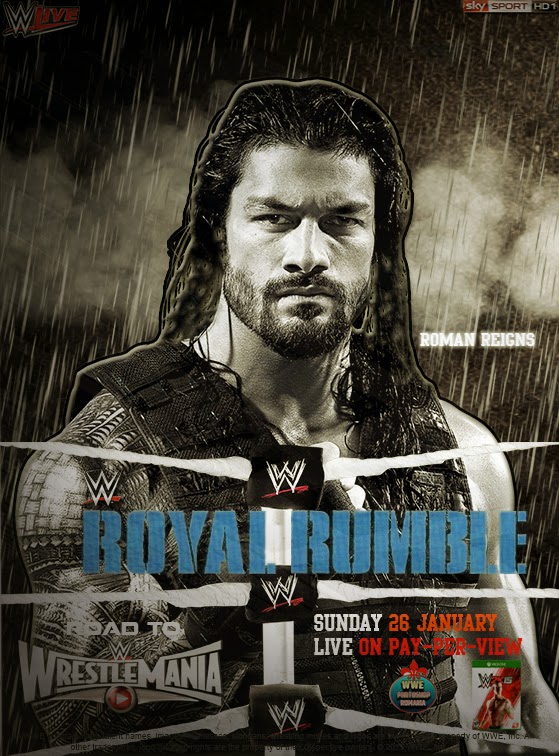 
The last time I reviewed a show was for Night of Champions 2014. Since then my interest in the current product has sort of dwindled. Not that I haven't been watching wrestling as I still enjoy many classic shows and matches on the Network on a daily basis.


This event is easily the most controversial since last year's Rumble event, but how good was this one overall? Let's find out.


I won't completely review the pre-show match since I wasn't paying too much attention but it looked like a  **3/4 to me.

The New Age Outlaws vs The Ascension
WWE had such a great run of fun opening matches but that streak ended with this one. Hopefully after this victory the announce team will stop referring to the Ascension as wannabes. I really fear for anyone coming up from NXT after the way Ascension were treated. The match was nothing special with nothing particularly memorable about it and it probably should have just been a complete squash for Viktor and Konnor. Pretty bleh way to start the show. *1/4

The Usos vs The Miz & Damien Mizdow
The Tag Titles are on the line. I really hope the Ascension are fine after this show because if they're not then the Usos will have no challengers for their Titles. These two teams may have faced off far too many times in the past couple of months, but this was probably their best one yet. It featured some nice nearfalls and false finishes. I could never really tell who the winner was until the very end. It was kind of annoying that the Miz was in the match the entire time, but at least it keeps the fans behind Sandow. Good stuff. This probably should have been the opener. ***

The Bella Twins vs Natalya & Paige
What the hell is with all the tag matches on this show? This was one I wasn't looking forward to at all in the lead up to the show, but it actually wasn't that bad. It wasn't good but at least it wasn't terrible. It could have been pretty damn good if Paige had gotten the hot tag or if the finish hadn't terrible. A forearm for the pin? Really? Well at least it was better than most diva matches (not including the awesome NXT matches). A forgettable, overlong match. *1/2

John Cena vs Seth Rollins vs Brock Lesnar
The WWE World Title is on the line. It's weird to think that this is Lesnar's first defense since September last year. And now we'll probably have to wait another two months for the next one. This match was so much better than I was expecting. Everyone performed magnificently here, especially Rollins who looked very comfortable in the main event spot. If Lesnar's performance didn't turn you into a fan of his then nothing ever will as he looked like a complete tank here that looked as if he could take on a whole army of men. The nearfalls were fantastic and I was never sure of who would come out as champion as the nearfalls were very well done. A terrific match and an early MOTYC. ****3/4


The Royal Rumble Match
What the hell happened here? The sad thing is that this one showed real promise in the first 20 minutes and I was expecting it to be one of the best ever, but obviously that didn't exactly happen. Bubba's return and DDP's surprise entry were brilliantly done and DDP hitting a ton of Diamond Cutters was just awesome. The Boogeyman's return was pretty underwhelming outside of a funny staredown with Bray Wyatt. Speaking of the (literal) devil, he was a real highlight of this match and looked very impressive with many eliminations and managed to stay in the match for about a half hour. And then everything changed when Bryan was eliminated. It totally deflated the crowd and probably everyone watching at home including myself. That was followed by an influx of wrestlers than no one was interested in until Mizdow came in and then he was eliminated quickly, resulting in an even angrier crowd. Only Ambrose and Ziggler got good reactions from the crowd after that. The reactions turned venomous once it came down to Reigns, Show and Kane. I wouldn't call this the worst Rumble ever but it's definitely close as it seems that Vince decided to say 'Fuck you' to the audience rather than putting together a fun match. **

5/10. This one had it's moments like the fun Tag Title match and an amazing World Title match, but the rest was either bad or just forgettable. If it wasn't for the Triple Threat match then this would easily go down as one of the worst PPVs ever and possibly the worst Rumble event ever. I'm totally disappointed with the booking but not enough to cancel my beloved Network subscription. It'll be interesting to see how we look back at this one in one year's time, but I will say that this one makes the 2014 event look like Money in the Bank 2011.
Posted by rossd971 at 10:53 No comments: