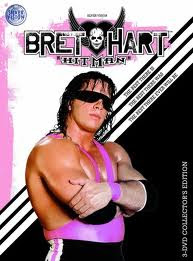 
At the time, this was an historic DVD set, as it was something that many fans thought that they would never see. Before the documentary starts, Vince McMahon himself thanks Bret for taking part in this project, which in itself is pretty huge. The feature itself is one of the best ones that the WWE has ever produced. Definitely up there with the Rise and Fall of ECW, the more recent Stone Cold documentary, and CM Punk's. Anyone who has read Bret's brilliant autobiography will already know most of these stories, but it's nice to hear them from Bret's own mouth. Amazing stuff.  9.5/10.

Bret Talks About the Origin of the Name "The Dungeon"

Bret Talks About being away from Family on Halloween

Bret Talks About how well the Hart Foundation got Along

Bret Talks About Learning the Sharpshooter

Tribute to Bret Hart's Wrestling Colleagues who have Passed Away


The Hart Foundation vs The British Bulldogs
These two teams have had countless matches against each other, and they never cease to be entertaining. Three amazing technicians and one very underrated wrestler in Jim Neidhart. A very good tag match here, and the guys really got the crowd invested into the contest. Unfortunately the time limit expires to end the match. ***1/4

The Hart Foundation vs The Killer Bees
The Killer Bees were a very under appreciated team around this time, as there were many other teams that had the spotlight. This match helps show that they were a great team. The video quality wasn't great. The heat segments were well done, and the match was very entertaining. The match ends with the time limit expiring, which is a shame because the finish sequence was great. ***3/4

Bret Hart vs Ricky Steamboat
This match was meant to take place at Wrestlemania 2, but was changed. This could have made Mania 2 better than it was, but at least we got to see the match here. If they were in their primes, this could have been a five star bout. It is an excellent match for it's time. Made Bret look like a great singles competitor. Steamboat reverses a crossbody to win. ***3/4

Bret Hart vs Ted Dibiase
I think this was a dark match. There was no commentary for the match, but it really didn't need it. Right from the start the guys cut a fast pace. I did think that Dibiase's sleeper hold was on for way too long though. A very good match here though. Match ends in a double count out. ***1/2


The Rockers vs Hart Foundation
I love this match. It may not have a clean ending, but everything before that was amazing. Just an amazing back and forth match that cut a fantastic pace. This ends in a double DQ thanks to Demolition, but this is easily a  **** match and is worth watching many times.

Bret Hart vs Mr Perfect
An all time classic for the IC Title here. Unlike most people, I prefer this to the KOTR match. Perfect was coming in with an injured back and was in a lot of pain, but he really wanted to put Bret over because he respected him. And because of that, we got this classic battle. An awesome technical battle, even if the ref kind of screwed up the finish a little. Classic stuff. ****1/2

Bret Hart vs British Bulldog
Quite possibly the best match in Summerslam history and even wrestling history. Bret says that this is his favourite match, and it's not hard to see why. Bret basically carried this whole match and managed to get an all time classic out it. The huge crowd helps as well. Just an amazing technical match, and even the botches seem to make it better! Amazing match that led to Bret winning his first WWE Championship. *****

Bret Hart vs Bam Bam Bigelow
In my opinion, Bam Bam had his best matches with Bret. These two also had a great finals match for the King of the Ring crown. This match features Spanish commentary. It doesn't detract from the match though. This was another great match between the two, with Bam Bam showing how great a big man he is, and Bret gaining the fan's sympathy. Bret rolls up Bigelow to win. ***1/2

Bret Hart vs Mr Perfect
Part of the KOTR Tournament. This is similar to their Summerslam match, although I do prefer that match. This match is probably superior to that match, but I like the historical aspect to that match. This is the better technical bout though, with both guys giving a classic performance. Fantastic match as Bret reverses a small package to take the win. Arguably the best KOTR match ever. ****1/2


Bret Hart vs Owen Hart
Without a doubt, the greatest opener for any PPV ever, and also one of the greatest matches of all time. No brother vs brother feud will ever beat these two. Many have tried and failed. Every move in this match is performed perfectly and every move is there for a reason. A classic Wrestlemania match and a classic match overall. Might even be the greatest match of all time. Owen gets the upset win with a victory roll. *****

And there's still another disc to go! If it was just these first two discs, then the set would probably get either an 8.5 or 9/10 rating. And we still have some classics to go.

Bret Hart vs Owen Hart
This was the main event match for the debut of the Action Zone. Great choice for a main event.  It doesn't come close to their Wrestlemania match or Summerslam match, but it's still a great contest. What else would you expect from these two. Just a great back and forth match that these two could pull off anytime. Bret retains with help from the Bulldog. ***3/4

Bret vs Hakushi
The very first match in In Your House history, so it's historical in a sense. This is probably Hakushi's best match from his time in WWE. Bret managed well with Hakushi's athletic skills. At the time, Hakushi was undefeated. Great match to start off the IYH PPVs. Bret rolls up Hakushi to win. ***3/4

Bret Hart vs Diesel : No DQ
These two had an awesome match at that years Royal Rumble that's worth a watch. This time there were no rules. This is Diesel's last match as a face and, thankfully, the final match of his way too long title reign. Bret's work on the leg of Diesel was great. I think this was also one of the first times that the announce table was used as a weapon. Awesome match as Bret rolls up Diesel to win the title. ****

Bret Hart vs British Bulldog
Quite a forgotten classic here. Over three years since their classic Summerslam bout and they were still putting on amazing matches. This time there's not really any historical value, but theres enough action to make a highly recommended watch. Just the fantastic technical match that you would expect from these two as Bret retains. ****1/2

Bret Hart vs Stone Cold : Submission Match
I have never seen this match rated at lower than five stars and I'm not about to change that. This match is known as not just one of the greatest matches in Wrestlemania matches, but also one of the greatest of all time. It is arguably the best wrestling match of all time. This was a brutal match, and Austin bleeding while locked in the sharpshooter is one of the most iconic images in wrestling history. It can be argued that this is the match that led to the Attitude era, thanks to the popularity of Austin. Bret wins as Austin passes out from the sharpshooter. Just incredible and almost impossible to surpass. *****

Bret Hart vs The Undertaker
From One Night Only 1997. Bret considers this his last great match in the WWE. True. He even considers Undertaker to be his final opponent in WWE. Even though Hart was the heel here, he was still cheered by most of the fans. Awesome match, it's just a shame it ended in DQ, or it could have had a higher rating. Still a great match though. ****


Bret Hart vs Chris Benoit
Owen Hart's tribute match. Also arguably the best WCW match ever and arguably the best free tv match ever. Additionally, one of the most emotionally charged matches ever, all in tribute for the late great Owen Hart. It doesn't matter how good the match is, considering it's all for Owen, but I definitely consider it an all time classic. Bret wins with a sharpshooter. *****

10/10. In my opinion, this is the best multiple disc release that the WWE has ever made. That isn't just bias because Bret is my favourite wrestler, it's just how good this set really is. You get a fantastic documentary with some added extra interview moments, and then you have the matches. Not one bad match in this set and most of them are all time classics. No doubt about it, this is a must have DVD set.
Posted by rossd971 at 13:18