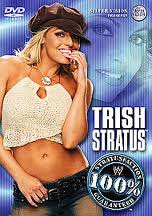 
Apparently a wrestling rarity . I've checked around and I've found very few reviews for this , so I guess it's a rare review as well . The feature runs for 65 minutes . I knew nothing about Trish before this , so this is all new to me . I found this to be very entertaining . It shows her childhood , what she did before wrestling , how she got into wrestling and then the main feuds and moments from her career . There's also a nice non-kayfabe conversation between Trish and Stone Cold . I do have to say , the 65 minutes absolutely flew by and I wish it had been 2 hours long . I know people want this because it's rare , but you should also get it for the quality .  I'll give it  8/10 .


There's a number of  'Trish Moments' named as follows :

Talking to Mr McMahon in a hot tub

Internet Babe of the Year '01

Internet Babe of the Year '02

Diva of the Decade


Trish Stratus vs Stacy Kiebler : Mud Match
From an episode of Raw . This is now the only Mud match that I have on DVD . I have absolutely no idea of how to rate this , so I'm just gonna leave it as ' Fun to watch ' .


Trish Stratus vs Victoria : Chicago Street Fight
After watching the feature , I really want to see this match now . The first ever divas chicago street fight . This was a well paced , hardcore style match . It's over quite quickly with Victoria picking up the win . **3/4

Trish Stratus vs Jazz vs Victoria
I'd put this as the second best divas match in Wrestlemania history . Good action throughout this match . A good triple threat match . Trish becomes the women's champion after a chick kick to Victoria . ***


Trish Stratus vs Jazz
From the UK Insurrextion PPV and is for the Women's title . This was a pretty good divas match , and it was long as well which was a nice treat . Jazz retains her title . **1/2


7.5/10 . A surprisingly good DVD here , with a great feature , fun special features and a few good matches . Recommended if you can get it .