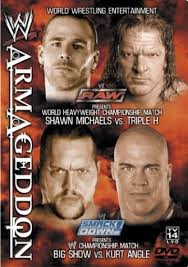 
The DVD of this event also contains the No.1 Contenders match for the WWE Championship, a week  before this event. As a bonus, I'll review that match as well after the review for this event. Lets begin.


The Dudley Boyz vs William Regal & Lance Storm vs Bookdust vs Chris Jericho & Christian
The World Tag Titles are on the line here, and elimination rules apply for the contest. The match was pretty entertaining with the Dudleys and Regal & Storm in it, but things really got going when those two teams were eliminated. It turned into a little gem of a tag match at that point. I'm surprised that Booker managed to kick out of the belt shot and the lionsault. One hell of an opener for the show. Great, exciting finish and it holds up today, over ten years later. ***1/2

Edge vs A-Train
Edge was here to get revenge for his partner, Rey Mysterio, after A-Train had injured his leg. A-Train was getting pushed as a big monster at this point. Didn't work in 2012 either. The match wasn't too bad, but the cop out ending with the steel chair ruins it. DQ for Sweet T is the final ruling. *1/4

Eddie Guerrero vs Chris Benoit
Hmmm, I wonder if this'll be a good match? (Notice the oh-so-subtle sarcasm there). Anyway, these two were feuding after Guerrero cost Benoit a shot at the WWE Title. I don't think these two need a storyline to have a match. The multiple german suplexes were awesome. The Chavo run ins were a little annoying, but they suited Eddie's character. Crossface gives Benoit the win. ***3/4

Torrie Wilson vs Dawn Marie
This was a fucking awful story. Dawn goes out with Torrie's father, but her plan all along was to seduce Torrie, and then she wants Al again. The lesbian stuff sounds good, but we didn't get to see any of it. This wasn't even Smackdown worthy, let alone PPV worthy. The match doesn't even take place, which is kind of a godsend.

Kane vs Batista
This match is a little historical, seeing as it's Batista's first match on PPV. I have no idea why these two are feuding. I'm guessing that it may have something to do with Katie Vick. I hope not. Not the best debut for Batista, but at least he beat quite an accomplished star in Kane. Sloppy match with a sloppy finish. 1/2*

Trish Stratus vs Victoria vs Jacqueline
Women's Title on the line. This rivalry was just between Trish and Victoria, but Jacqueline was added after she called Victoria a psycho bitch. Still better than any diva storylines we have nowadays. Some sloppiness in the match, but it was still enjoyable. Short too as Victoria retains. 1/2*

Kurt Angle vs Big Show
I think everyone knew that Angle was leaving with championship, as it was obvious that Show was only a transitional champion. That's by no means a bad thing since it led to Lesnar/Angle at Mania XIX. Quite the overbooked match, but it needed it. Brock gives Show an F5 to give Angle the win and the title. **1/2


Triple H vs Shawn Michaels : 2 out of 3 Falls
First fall is a street fight , the second a cage and the third is a ladder match. I've seen this one receive rather unfavorable reviews in the past, but I loved it as a kid so hopefully the feeling is still there. The crowd was quiet for the start of the match, although it did start off a little slowly. The flaming 2x4 wrapped in barbed wire was a cool moment. HHH hits the pedigree to end the first fall and bring down the cage. This isn't as good as I remembered . Not nearly as good as their Summerslam match, or even their Raw match. HHH splashed through a table to make it 1-1 . HHH throws HBK off of the ladder and out through some tables to win the World Championship. Very dull match considering how good their Summerslam match was.  **1/2


5/10. Not a great show here. The two main events were average and there were some other very sloppy bouts in there. The opening tag match, and the Guerrero/Benoit match are worth a watch though.

Edge vs Chris Benoit vs Eddie Guerrero vs Kurt Angle
Winner goes on to face Big Show for the WWE Championship at Armageddon. Everyone worked hard in this match, especially Edge and Angle when it came down to them being the final two. Some great nearfalls and it was unpredictable too. Just awesome, and one of the better Smackdown matches of all time. ****1/2

The DVD is worth getting just for that extra match, since it's the only place you can get it I think.